The Elmira College President's Council is pleased to announce Zackarie Stedge '21 as this year's recipient of Stand Energy Prize. The Prize, established by Stand Energy Corporation, recognizes an Elmira College student who, in the course of performing an internship with regional businesses or community organizations, has demonstrated outstanding leadership, initiative, creativity, and responsibility. 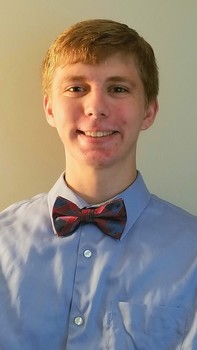 "It was the goal of Stand Energy Corporation and myself many years ago to establish a program whereby students attending Elmira College would be recognized not only for their own personal achievement and success, but for their ability to improve and give back to the local community of which they belong and have grown within," said Larry Freeman, executive vice president of Stand Energy Corporation. "As we near the 20th anniversary of this program, I would like to take a moment to reflect on these words from President John F. Kennedy: 'Let us think of education as the means of developing our greatest abilities, because in each of us there is a private hope and dream which, fulfilled, can be translated into benefit for everyone and greater strength for our nation'."

Stedge is an economics major with minors in mathematics and political science from Horseheads, New York. He was nominated for the Award by his supervisor and Trailblazers executive director, Alli Woodard '17, for his internship during the 2019-2020 academic year.

"Zack demonstrates a tenacious work ethic and a positive attitude that made him invaluable to our organization, especially as Trailblazers PAC continues to grow nationally," said Woodard. "We are so fortunate to have Zack as an intern and volunteer; he is a fast and efficient learner, detail-oriented, and a compassionate and kind person-qualities I believe are needed in the workforce now more so than ever. Trailblazers candidates have affected the lives of over 2 million people in communities across this country, and Zack is integral to that."

Stedge has also been involved in EC Rotaract and the Investment Club. He is an EC Legacy, with his mother, Wendy J. Slater, receiving both her undergraduate and graduate degrees from Elmira College. After graduating from EC, Stedge hopes to attend graduate school for economics or data analysis.

"It is not only an honor and privilege for me to recognize Zackarie for his work within the surrounding community, but also with Elmira College and their role in cultivating and developing so many outstanding men and woman over so many years, said Freeman. "We look forward to the many years ahead working with Elmira College and recognizing the bright students who will define our future for many years and beyond."

The Stand Energy Corporation, the supplier of natural gas to Elmira College for many years, in partnership with the College and the President's Council, has established the Stand Energy Prize to honor Elmira College students, nominated by their supervisor as demonstrating the following traits in an exemplary manner: